Growlife: How High Can It Go?

“[W]hen the market goes your way, you become fearful that the next day will take away your profit and you get out – too soon,” stated legendary trader, Jesse Livermore.

Well, the next day is today; and investors fearful of recent and massive profits taken away from a sudden spike down in shares of Growlife (PHOT) should consider the sage words of, arguably, the greatest stock trader that ever was, Jesse Livermore, who also then stated, “The successful trader has to fight . . . deep-seated instincts” that come from the fear of loss.

My Dec. 30 Recommendation and Today’s Observations 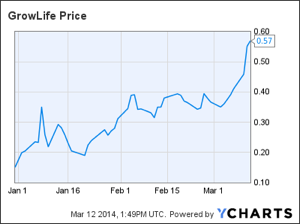 After recommending PHOT on Dec. 30 at the day’s closing price of 14.2 cents, a healthy 288% return within 48 trading days now stares traders in the face. And like a recovering alcoholic who’s tempted to take that first drink, the temptation to sell PHOT must be devilishly enticing as the stock closes above 50 cents for the first time since Jul. 2011.

And with this latest vault to 55 cents, the market cap of PHOT has now reached back up to a hefty $392 million, a sum equivalent to some substantial, proven and profitable small-cap enterprises.

A 33-year-old and 700-employee-strong tech company of similar market cap to PHOT, Mercury Systems (MRCY) of Massachusetts, for instance, must be thinking that they’ve been working in the wrong business all these years.

With the marijuana craze providing hurricane winds to the sails of PHOT, who needs to get up in the morning to make $220 million worth of computer peripherals each year when it only takes a matter of paying some market entry fees; forging a few strategic alliances; and maintaining an employee count below 20 to achieve a $392 million market cap?

PHOT, in my opinion, doesn’t have the same underlying value when compared to MRCY.

But, “[m]arkets are never wrong, opinions are,” argued Livermore. “A prudent speculator never argues with the tape.”

On Jan. 7, SA published my article, entitled, Growlife: Missed The Big Move? Catch The Second Big Move, where I suggested that a meaningful pull-back from a more-than-triple in the stock price was inevitable, as short-term traders would most likely run to the bank with their easy profits.

Since Jan. 21, however, PHOT has moved higher once again, defying all logic. For example, how many stocks could weather the storm of, what is most likely to be, an upcoming dilution?

If you follow JC Penney (JCP), for example, you’d notice that the stock cratered after numerous analysts pointed out the need of a capital raise through the issuance of stock to prevent the retailer from filing Chapter 11.

However, on Feb. 7, a Friday, PHOT issued a news release, entitled,GrowLife Conducts Special Meeting of Stockholders; Approves Authorized Share Increase for Growth. The news release goes on to announce the authorization of two billion additional shares to, presumably, raise more capital at some point before the company’s approximately $237k of cash runs dry.

Though the company warned journalists not to misconstrue the news release to suggest that Growlife management will “immediately dilute the current issued and outstanding share count ,” the authorization does imply, however, that management may consider an equity raise in the future.

After a weekend of mulling over the implications of a stock dilution, one would think that a real threat of an equity raise would have trashed PHOT back down to earthly prices. But, one would be wrong.

The following Monday, Feb. 10, and Tuesday, Feb. 11, PHOT hiccuped a bit, but the stock was back on a bullish track by the end of the week, trading back above the pre-announcement share price of 34 cents, to eventually settle at 38 cents at the close of trading on Feb. 14, a week after the announcement.

CBS Market Watch’s Cody Willard stated in his article of Feb. 13, entitled, You’d have to be a dope to buy marijuana stocks, “In the last few months, the marijuana stock hype has really kicked in and there’s a lot of money from mostly retail investors that’s betting big on this sector.”

Including PHOT in his list of mentions, Willard added, “I’m sorry to pop their bubble, but I’m pretty sure there’s going to be a lot of that money lost after this pot stock bubble pops and these dreams of big legal profits from publicly-traded stocks with pun-like and pot-reference symbols.”

PHOT closed at 35 cents on Feb. 13, nearly unchanged from the previous day’s close.

Following the article, and after nearly two weeks of trading, PHOT and other marijuana stocks continued to rise, fueled, presumably, from continued reports of explosive demand creating marijuana shortages in Colorado, as well as updates to state legislators’ initiatives and legislation regarding legalization of marijuana for either medicinal, recreational use, or both.

On Feb. 26, Market Watch published another Cody Willard article, entitled, Deeper thoughts on bitcoins and marijuana stocks, where he reported on the reaction by investors to his Feb. 13 article.

“A couple weeks ago I wrote an article called, You’d have to be a dope to buy marijuana stocks and boy did it ever hit a nerve,” stated Willard. “So far, that column has generated more than 250 comments, 100s of twitter responses and dozens of Scuttles on Scutify [Willard’s social media scheme] – almost all of them angry, spiteful and/or full of ad hominems.”

Willard added, “The angrier you penny marijuana stock pushers get at me for telling you penny stocks are a scam, the more bearish I get.”

But, in the meantime, the bulls are making a fortune in PHOT.

So, what’s the point of all of these ad hominem attacks against journalists who are bearish, the emotional vitriol, and the madness of crowds as it relates to marijuana stocks, but more specifically in the case of the best of the lot and focus stock of this article, PHOT?

The point is: nothing is new to the nature of human beings.

Traders will take stocks higher without regard to the underlying fundamentals at any given time. Sure, I ascribe to the idea that “marijuana [stocks] will be the single best investment idea of the next decade,” according to Todd Harrison, CEO of Minyanville, but right now, PHOT is defying some serious gravity this early in the game.

“I absolutely believe that price movement patterns are being repeated,” stated Livermore. “They are recurring patterns that appear over and over, with slight variations. This is because markets are driven by humans — and human nature never changes.”

So, what’s the recommendation on my favorite marijuana stock, PHOT?

Hold a stock like PHOT until the market tells you to sell, according to Livermore. “You should have a clear target where to sell if the market moves against you.” And in the case of PHOT, 45 cents may turn out to be a good spot.

If you would like to follow me with my analysis of PHOT and other potentially explosive small-cap stocks, be sure to join the free email list.