Of the three types of trades I make regularly; scalp, day and swing, swing trading across several days is my favorite. The process can be as complicated as you make but I think it’s fairly easy. There are usually some really sweet trades to be had if you’re doing your homework daily, or letting me do it for you.

Recently for example, we nailed SIRI again. And while the market cap on this stock is a bit higher than I’d prefer, it’s a stock that brings a level of security in choppy markets knowing the PPS won’t fluctuate too much.

So last week I banked over $2,000 on SIRI just using some basic common sense, going against major media outlets like TheStreet.com etc… calling SIRI as a sell.

So here is how it played out, pretty simple actually.

My subscribers and I been nailing SIRI off the $1.60 for the last two months for countless successful trades. But last week, with the bulls in control I knew the $1.60 range wasn’t going to be an option. So I took a look at the chart and grabbed 10k at $1.75 and then another 10k at $1.71. It was that afternoon that TheStreet.com issued a sell on SIRI and shares fell to $1.67.

I mean seriously, they issued a sell on SIRI just before a massive move, but I didn’t sell into the media and the very next day SIRI went on a bull run into from the $1.60’s to the $1.80’s which is a HUGE move for SIRI

The very next morning however, SIRI reiterated guidance and updated their forward outlook sending shares up into the $1.80’s which was in fact my target. I actually added another 10k shares at $1.80 and sold the next day for an easy $2,000 in profit in just a couple of days work.

Now I’m not a rocket scientist but it’s safe to say that Marek Fuchs, “Think like a trader” comment can only be viewed as silly at this point and it’s just one more example of the media pumping a popular stock just for traffic. I get Fuchs, “BBY and MCD missed comment” but honestly, was that a good reason to sell SIRI at $1.67 on the 13th? I wonder how his readers feel about that call? I wonder if they lost money? I’m sure he’s excellent at what he does, but this one was a bad call and it happens all the time but everyone continues to use major media as their source of guidance.

I love swing trading and this is just another example of an easy trade. Not only did we have strong support at $1.65 giving us a firm stop area but we also had a bull market last week. So when the CEO came out and said SIRI is kicking some butt, we cashed in on his pump.

In my mind SIRI down here is a steal and I’ll continue to flip the stock each and every time I find good entry. 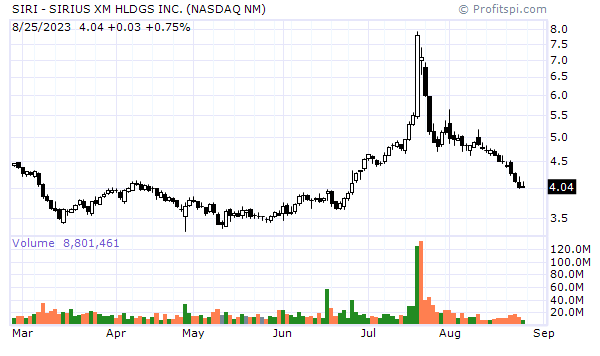