The INVE Robbery And A Case For Warfare This past Monday May 23rd Identive Group Inc. (INVE) announced excellent news sending shares soaring up the chart on a big gap and run before pulling back to the $3.40 range around 2pm in the afternoon.

News so good over 5 million shares traded hands, much of which was early on due to the excitement. INVE announced the signing of a Value Added Reseller (VAR) agreement with NXP Semiconductors (Nasdaq:NXPI), under which the companies will work together to identify and address emerging opportunities in the secure identification market by promoting and selling Identive’s identification products, based on NXP’s RFID semiconductor technology.

I’m sure shareholders rejoiced and high fives were flying…it’s the type of news you hope to get caught up in before it hits. But little did everyone know the dark secret the company was about to unleash later that day – more on that soon.

Friday’s close was $3.04, Monday’s open $3.45 or a 14% gap followed by a 10% run in the first 20 minutes to $3.79. Then profit taking set in and shares settled in the afternoon around the open of $3.45 which is where I decided to enter. My entry seemed good as shares climbed immediately up to $3.50 and I felt like I’d probably score a quick winner. Then something odd happened and out of nowhere, offers filled with massive size at $3.50. I’m talking about multiple 15-20k orders on the level II.

Shocked to see so many sellers I immediately assumed I placed the wrong bet for whatever reason and started to reconsider my entry. I gave it one retest of $3.50 and when the same offers appeared again I knew it was time to move on selling for a measly $24 profit.

Shortly there after INVE tested the open and then proceeded to tank into the close hitting $2.94 when the bell rang. Obviously the post market news of dilutive financing leaked as sellers ran for the door dragging the price down with them.

The 7.8 million share offering priced at $2.55 is expected to gross about $20 million for INVE who said it plans to use the offering’s net proceeds for acquisitions, working capital and general corporate purposes.

The following morning shares were well into the $2.40’s and hit a low of $2.35 or about 40% off the previous days high and all orchestrated by the company.

To me, while legal, this type of shit is exactly why I take developed my system PennyStockWarfare which aims to protect my hard earned cash from shady companies like INVE. How is releasing great news in the morning followed by dilutive financing in the post market not the biggest pump and dump we’ve seen in a while?

The company should be ashamed of themselves for smacking their loyal shareholders that way, shareholders who probably added that day in the high $3’s only to see their entry chopped in half the next day. Since then INVE has settled and is actually up 5% today trading at $2.47 as I type but the scar remains. 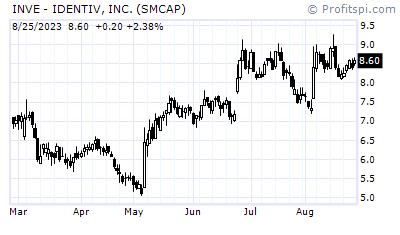