Stocks were mixed for the third straight week.  While the DJIA, DJTA and S&P 500 ended little changed, the FAANG stocks led a 1.84% NASDAQ rebound after a two-week funk.  Bank stocks sold off from another week of a relentlessly flattening yield curve, but precious metals stocks rose smartly.

As I’ve noted repeatedly in these reports, as the yield curve flattens, banks will come under increasing pressure.  And voilà, I read this weekend that in addition to Spain’s recent bankruptcy of Banco Popular bank, two Italian banks, Veneto Banca and Banca Popolare di Vicenza, were just ordered by the ECB to be liquidated after the market close on Friday.

I expect more bank liquidations as the year progresses.  How and when the coming liquidations of other banks affect stocks depends upon how these banks further impair the balance sheets of the biggest banks, as well as the actions taken by central banks to force acquisitions of these ‘bad banks’ upon ‘good banks’.  Watch the spread between the UST10Y and UST2Y for guidance of how rapid (or not) the brewing banking crisis unfolds.  I noticed shares of Deutsche Bank (DB) closed down another 1.07% this week to close just above its 52-week MA.

And speaking of which, the spread between the UST10Y and UST2Y flattened another three basis points this week to close the week at 83 basis points, a spread not seen by this market since early September 2016, a time period when the UST10Y yield traded at the 1.6% level.  Today, the UST10Y yields 2.15%, and dropping, while the UST2Y rate has been rising.

The spread between the UST10Y and 30-day US dollar LIBOR rate flattened again this week to close at 93 basis points.  This week makes six of the past seven week that the UST10Y and LIBOR yield curve has narrowed.  And have you noticed that more and more references to flattening curves have been mentioned in the media?  I have.

There was not much action in currencies this week.  The euro against the US dollar was nearly unchanged at 1.1193, while the yen fell slightly to 111.28.  So, not much in the way of the yen carry trade aided US stocks this week.

The precious metals (PM) market were very resilient throughout the week.  The prices of dollar-gold and dollar-silver closed nearly unchanged during the ongoing carnage in the commodities markets.

And the PM stocks may have given me a heads up to the future direction of gold and silver prices, as the GDX, GDXJ and SIL rallied strongly by 3.08%, 3.64% and 3.26%, respectively.  I feel a rally in the metals may be coming after Memorial Day.  Let’s see if my hunch is right.

Keep in mind, the copper price has not broken above its 200-week MA.  And when/if the copper price does breakout, the signal will be quite loud and clear that the commodities rally has begun.  However, with a steady stream of macro data coming out of the US and China pointing to poor commercial loan demand, the copper trade should remain uninteresting.

And finally, I want to cover the oil market.  My $45 target price was easily crushed again this week, as the price of WTIC actually traded as low as $42.05 on Wednesday.  Unexpectedly, there was no serious jawboning out of Riyadh during this week’s decline.  Will the Saudis panic if WTIC reaches $40 by announce further production cuts?  Or have the Saudis come to the conclusion that further production cut agreements would be futile when more and more production has been coming out of Iraq and the US to replace the lower outputs from Saudi Arabia and Russia?  The Saudis would just end up losing more market share, which has never been a strategy of the Kingdom.  For now, the oil market looks ugly for the bulls.

But is there a trade here?  Maybe, a short-term trade.  If you look at the WTIC:copper chart (a ratio chart), below, you’ll notice a 30-month-long reverse head-and-shoulders pattern that suggests to me that the oil price is staged to outperform the copper price in the very short term. 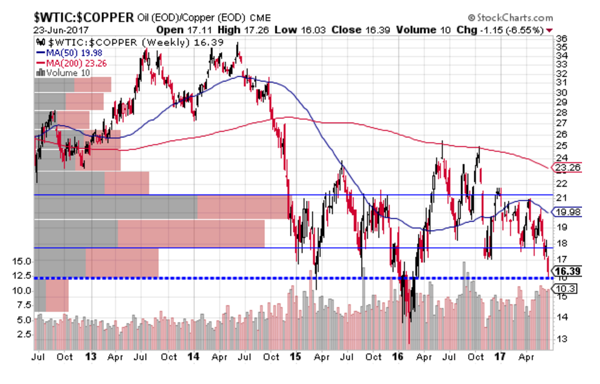 Notice, too, the significant drop of 6.55% of the ratio, which touched the 16-times level, and then bounced.  That suggest to me a bit of a capitulation in the oil market.  Odds that the WTIC:copper ratio will widen is quite high.  So, to trade the WTIC/copper ratio, buying oil and selling copper make senses to me at a level as close to 16-times as possible, with a target ratio of 18-times to unwind the trade.  This trade is a possible quick 10% capital gain, or a percentage gain of several times more when levered.

If I’m wrong about the ratio widening, it would tell me that a deflationary collapse is underway in commodities prices, a terrible scenario for the Fed.  I don’t expect the Saudis (or the Fed) to lose control of the commodities market just yet, so I don’t expect $35 oil anytime soon, but crazier things have happened.  And, if I’m wrong about WTIC, according to the volume-by-price chart of WTIC, below, the next support level is all the way down to $35.75. 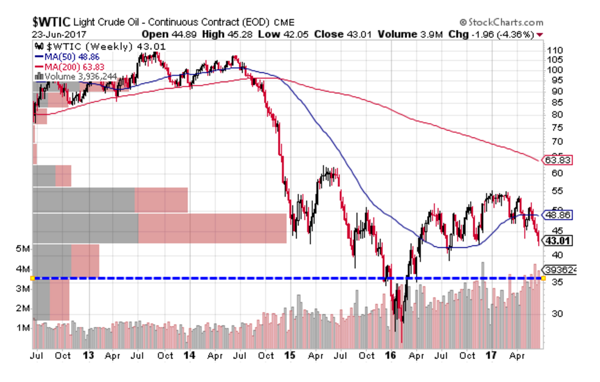 But don’t count out the Saudis to put up a good fight to elevate oil pricing, because the Kingdom of Saudi Arabia’s sovereignty is literally at stake at oil price this low.  With Turkey sending troops to protect Qatar from hostilities brewing between Saudi Arabia and Qatar, in response to Saudi Arabia’s severing of diplomatic and economic ties with the tiny Gulf nation, you can bet the Saudis are mighty nervous about their own balance sheet at this time.  How many wars in addition to the ones waged with Yemen and Syria can the Saudis afford at $40 oil?

Okay, what am I thinking about this week?  Well, nothing much different from my thoughts of last week.  Yield curves continue to flatten.  Banks are beginning to fall.  The US dollar looks ‘heavy’.  Commodities are tanking, and don’t appear to be finding help from a cooling of China’s commodities import bonanza.  And the Fed doesn’t have many friends left on Wall Street, White House and Capitol Hill.  Even Goldman Sachs is jumping aboard the recession watch, insinuating that the Fed’s interest policies are behind most recessions.  No kidding.

I just cannot see how another Fed tightening in December won’t tip the US economy.  Even though we’re talking about another 25 basis points in December, which is the consensus now, it’s the meager-to-no spreads between borrowing short and lending long that insolvencies in the banking system make.  And it appears that another 25 basis points rise in the fed funds rate is already priced into the December futures contract, so that’s the good news: the stock market has been digesting that bet.  However, the bad news is: the banking system cannot stomach an additional flattening of the yield curve.

We’ve had three European banks that didn’t have realistic plans to raise capital, so the ECB ordered them liquidated  So, if the Fed makes good on its promise to continue hiking into 2018, we are, for sure, in trouble with US equities.  Right now, anything could happen to change the course of the Fed, but it is running out of time.  The global economy is rolling over—right now!

Therefore, I remain very defensive and diversified in my core accounts outside of my trading capital.

Okay, let’s move on to my holdings, where I’m kicking butt this week.

As I mentioned in my June 21 alert, I closed out these three trades because I’m paring down my exposure to a market that appears tired.  In total, this week’s winnings are $4,200 for a compounded annual return rate of 37%.  I’ll take it!

My current portfolio: LQMT, LC, and GRPN. With Q2 window dressing and the ‘TrumpCare’ vote Thursday, I’m not looking to make any purchases until next week at which point I’ll have a new watch list.

The gains (or loss) to my portfolio this week are as follows:

Groupon (GRPN) was a big winner for me this week, as the stock powered higher by 7.76%.  Motley Fool mentioned it likes GRPN.  Why?  For the same reasons I bought the stock.  Margins in its US/Canada business are rising; unprofitable international markets are being eliminated; and the company’s active buyers are rising.  What is there not to like about a stock in the process of a successful turnaround that sells for $0.61 on $1.00 or revenue?