Previously battered FAANG stocks led the NASDAQ to an all-time record this week, with Facebook (FB); Apple (AAPL) +3.37%; Amazon (AMZN) +2.36%; Netflix (NFLX) +7.28%; and GOOG +4.07% rallying back strongly from three weeks of strong selling pressure.  FB closed at an all-time high, with the rest of the FAANG stocks closing Friday at near-all-time highs.

After tense trading on Tuesday, which included a test of the indexes’ respective 50-day MAs, stocks rebounded leading up to and during Yellen’s testimony to Congress, in which she spoke the words all markets have been so patiently waiting to hear.  I’m going to spend the entire first half of this report on Yellen’s testimony, because I think it’s that important to all traders speculating in these markets.

Because Yellen’s testimony this week clarifies the central bank’s confidence in its guidance, I’m going to point out the quote that everyone has referenced as the catalyst of this week’s three-day turnaround rally.  Here is the important one-sentence highlight of Yellen’s testimony that sparked all markets higher:

Because the neutral rate is currently quite low by historical standards, the federal funds rate would not have to rise all that much further to get to a neutral policy stance.

Essentially, Yellen is saying here that the Fed has added definition to what its “neutral” policy actually is.  In the past, many assumed a neutral policy meant something like a 5% overnight rate.  Not so.

In other words, it’s different this time.  Previous GDP growth rates, rising real incomes and higher living standards are not coming back for as long as the eye can see, is Yellen’s message  After 46 years of a free floating dollar, the US economy has reached its saturation level of debt, limits to cost structure, productivity gains and, therefore, global competitiveness.

From Yellen’s admission that the Fed cannot generate economic growth through its tools alone tells me two things.  One, the Fed is now deathly afraid of a spiraling asset-price-driven depression that we’ve been witnessing since the bursting of the commodities bubble in 2011 and oil bubble, in particular since the summer of 2014.  Trust me on this one: Yellen must now know what it feels like to be a pilot whose plane has just stalled.  The ailerons and rudder don’t respond to commands.  And two, the timing of her statement about the definition of “neural policy” tells me that the Fed has finally succumbed to the conclusion that all of its efforts to reignite a normal economy have demonstrably failed and must now take her message via a public forum to signal Washington to take over the effort.  That’s it.

So, you may be saying to yourself, “Well, we all knew Fed policies weren’t working.”  My response is, “Tell a drunk why he suffers with liver damage.”  Imagine, these people who day after day sit at their desk in the Eccles Building in Washington are true believers in centralized power over money!  They are full-blown Mandarins in business suits.  Get it?  The evidence of failure must be so overwhelming for Yellen to admit that what was once a Greenspan floor of overnight rates in 2003 is now a ceiling!

Essentially, the Fed has just admitted it lost its Waterloo.

And here’s the statement that’s been mostly ridiculed by those commenting on the Internet:

Possible changes in fiscal and other government policies here in the United States represent another source of uncertainty. In addition, although the prospects for the global economy appear to have improved somewhat this year, a number of our trading partners continue to confront economic challenges.  At present, I see roughly equal odds that the U.S. economy’s performance will be somewhat stronger or somewhat less strong than we currently project.

Of course, the last sentence made me laugh, too; but what Yellen is saying here is, that the Fed assesses 50/50 odds of Washington passing an effective overhaul of the tax code, meaningful infrastructure spending programs and an overhaul of the Affordable Care Act (ACA).  If these issues were overhauled in a way akin to an FDR-like socialized solution, the day of reckoning for the US dollar may be pushed off a little while longer.  With many in Washington and the Press attacking President Donald Trump at a pace and intensity that Richard Nixon never received in his day, does anyone expect a sudden Kumbaya and a bipartisan economic plan any time soon?

And for those pointing to Ronald Reagan’s bulldoze economic package of the early 1980s as a cure for what ails the US economy, they don’t understand that we live in the vastly different world of fierce competitors in Asia and combined record debt at the government, corporate and household levels.  Reagan came into the Oval Office with overnight rates in the double digits and a public debt-to-GDP of 41% by 1988.  Today, debt-to-GDP is north of 100%, and overnight rates can be cut 1% before hitting zero!

With this in mind, look at the chart, below, of the velocity of M2 money supply.  The shaded portion in light red means that money volumes of all transactions are falling behind the increase of overall money volume.  Folks, this chart shows what a von Mises “crack-up boom” looks like before a currency collapse.  If it weren’t for the terrible mismanagement of competing currencies, the US dollar would have already collapsed. 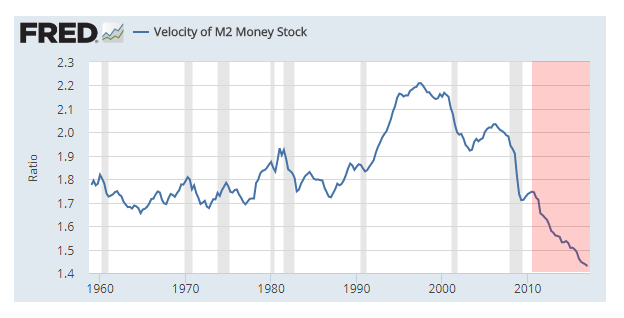 In the chart, notice the beginning of the renewed slide in money velocity at start of the shaded area.  That’s the time when QE1 ended.  Since then, QE2 and QE3 have had no effect upon money velocity.  In other words, the Fed has known for a five years that its QE exercises have had no impact on real economic growth.

It’s now up to Washington to effect some kind of fiscal stimulus that puts money directly into the pockets of working class Americans.  That’s what the Trump economic plan has been all about, beginning with his campaign in 2016.   And the political environment in Washington that’s required for a nation of such complexity, bureaucracy and special interests negotiations to suddenly come together and enact emergency legislation in all areas of the US economy appears unfeasible.

And if you missed the comment JPMorgan Chase CEO, Jamie Dimon, made on Friday in a conference call to investors, you missed out on a Fed cohort cracking up under pressure, when he bizarrely exploded:

It’s almost an embarrassment be an American citizen traveling around the world and listening to the stupid shit we have to deal with in this country and at one point we have to get our act together. We won’t do what we’re supposed to for the average American.

I believe this week is the turning point to where?  I’m not sure, but the signs are all there that point to panic finally setting in.  We’re definitely approaching a crisis and inevitable policy response—this year.

Are you ready to make some big scores from the volatility?  I am, and will be stepping you through the opportunities as they arise.  Remember, there’s always a bull market somewhere, and that new bull market(s) will emerge as sure as the sun comes up.  I’m excited that the eight-year-long boil may be ready for lancing.

Think about this week.  When was the last time all liquid asset classes rose so strongly?  I’d have to research that.  Stocks, commodities, precious metals and even bond prices rose smartly this week with hopes of helicopter money dancing in our heads.  And the only loser was..drum roll, please…the US dollar, which fell to a nine-month low, and is headed south in the future, folks.

Do you realize that the US dollar has dropped 8.5% since the start of 2017?  I suspect we’re in the throes of a currency debasement rally in stocks, monetary metals and commodities.

It was a good week.  The markets responded to Yellen’s Congressional testimony with a great big smile, as all these market participants know that helicopter money is on the way, either from the Fed or Washington.  But it’s coming.  There will be no sudden crash induced by the Fed, as I and others had feared.  That’s the good news.  The bad news is: Washington may not be up to the task of taking over the reins from the Fed, leaving the Fed no choice but to announce a QE4-like program by the end of the year, and no later than the first half of 2018, the year of Congressional elections.

Can you now see why the nation’s leading US banker cracked up during his conference call?  It’s quite clear that Jamie is feeling the pain.  And his pain will soon be our gain in those markets he doesn’t profit from.

After we make it through the coming week, I’ll be back to commenting on individual markets and what I expect after I see how markets react this coming week to last week’s positive market response to Yellen’s testimony.

My current portfolio: LQMT and LC.

And let’s start watching FRED for entry. I have 3,500 at $6.41 in my Swing Trading portfolio but am looking to shift this trade idea to the Long-Term portfolio.

FRED is a ‘turnaround’ play on the retailer’s ability to ‘rightsize’ its business in a very competitive and evolving retail pharmacy marketplace.  Some sizable bad news about Fred’s Pharmacies has reached traders during the past six weeks.  First, Q1 earnings were characterized as “dismal” at the top line and on a comparable stores basis.  And second, the merger between Walgreens (WBA) and Rite Aid (RAD) fell through on June 29, closing the window on Fred’s opportunity to acquire 1,200 Rite Aid stores and become the nation’s no. 3 pharmacy.  As a result, since the retailer’s earnings report of June 6, the share price of FRED has dropped 53%.

Not unlike many retailers I’ve review in the past two years, Fred’s Pharmacies is either in the slow progression to bankruptcy, or is in the process of turning an unprofitable business back to a money-making enterprise.  In short, Fred’s turnaround strategy and position in the market fit well for a turnaround as long as the company executes its strategy diligently.

The retailer has invested in an intelligence product and service to track consumer preferences and trends so that the company can rapidly respond to customer demand.  Fred’s has focused a lot of attention to its retail and specialty pharmacy business where the company has so far demonstrated a 3.3% jump in same-store sales in the case of the former, and a 24% y-o-y spike to sales in the case of the latter.  In addition, management has said that in Q2 it saw a 1% y-o-y increase to generic drug sales, a result of which has been due to aggressively work enlisting local hospitals to refer patients to Fred’s 340B program, now offered in 70 Fred’s locations.  The company plans to double this store count by the end of calendar year 2017.

We anticipate continued operational improvement throughout 2017 as the initiatives underway continue to deliver results. And as a result of our initiatives, we expect to be profitable on an operational basis by the end of fiscal 2017.

I like this stock because FRED suddenly trades at a Price-to-Sales of only 0.13, compared with the industry average of 0.52.  Typically, a low P/S ratio usually also includes a high Debt-to-Equity ratio.  In this case, the retailer’s Debt-to-Equity of 0.54 is not too high.

Gross margin is expected to increase, and employee retention spending is anticipated to be more than offset by high-dollar margins from its growing specialty pharmacy business.

Institutional investors hold 93.1% of outstanding shares, leaving a tiny pool for the retail investor to move this stock wildly.  I like that feature.

Overall, I think FRED is a great risk-to-reward play on a turnaround within one of Wall Street’s most hated sector.