It’s been a wild three weeks for traders of LQMT.  This update serves as compilation of responses to the dozens of emails I had received during the past three weeks.  So, I’m sharing my thoughts with all my subscribers about LQMT during this consolidation period.

So, we’ve witness during the first week (ending Nov. 3) of the selloff a complete free-falling $0.158 drubbing.  However, the stock had rallied back $0.039 to close at its 52-week moving average (MA) by the close of the first week.

The second week ushered in buyers during another volatile week of as much as a 25% swing of the price of LQMT.  But at the close of the second week, the stock maintained its bullish chart with a settlement price above its 52-week MA at $0.29. 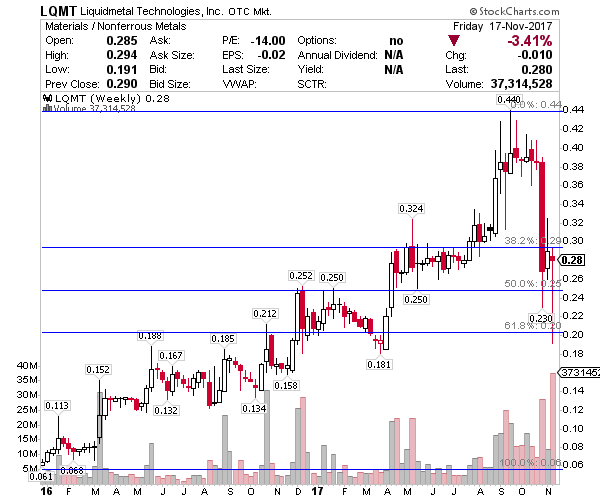 And last week, we saw a textbook example of a capitulation.  The price of LQMT had collapsed through the stock’s 52-week MA, and had bottomed within a fraction of a penny to settle just above its 200-week MA.  At the 200-week MA, the big guns came in to buy LQMT at bargain prices not seen since April.  But from the chart of LQMT, below, you can clearly see the trading activity that closed the stock once again above its 52-week MA during the past week.

So, what happened?  The explanation is quite simple, as far as my thinking goes.  We’re nearing the end of the calendar year, a time when profits are usually booked.  The stock had been range bound between $0.36 and $0.425 for six weeks, with the big moves which had been made this year during the late-spring and summer months.  At that time around the time of Labor Day weekend, early birds had shown unrealized profits as high as 100%, so naturally seasonal selling of the stock at this time of the year was as hard as the hard run-up of a 100% capital gain certainly had been within those short few summer months.

Today, the LQMT chart shows a beautiful and pristine Fibonacci retracement of the stock price during the selloff to the 61.8 level (coincidentally calculates almost to the 200-week MA) and a rally back to the 38.2% Fibonacci level.  As a seasoned trader, when I see a stock fall as hard as LQMT had following a big rally, I will quickly formulate the price at which I’m prepared to catch that ‘falling knife’ for another ride up the roller coaster.

So, the bottom line to my response to all the emails I had received about LQMT is:  Remain patient.  The action in LQMT during the past three weeks had been quite normal and commonplace.  Look at all the great stocks of the past that have turned out to become 10-bag plays; they all underwent dramatic pullbacks from time to time as a way of clearing the tension for the next round of wholesale buyers who refuse to chase a stock.

From my standpoint, the action this past week tells me two things.  One, the stock’s volatility of the past three weeks indicates that LQMT might become a ‘monster’ stock.   And two, that the retracement of the stock price and subsequent rally back to the Fibonacci 38.2% level within only two weeks tells me that the smash of the stock price had everything to do with the extent of the strong rally from the Dec. 2015 lows.  From the Dec. 2015 low of $0.63, LQMT had reached a 545% unrealized return prior to this latest pullback.

In closing, as I mentioned in my email alert about LQMT on Friday, my thesis of Liquidmetal Technologies has not changed one bit.  All bull rallies come to a point of the price getting ahead of the company’s progress.  LQMT is no exception to this phenomenon.  And for those not in the stock yet, does a 30% discount to own a potential monster stock appeal to you?   It should.