2 Patterns And 3 Hot Stocks To Watch This Week

I’m rolling into the end of October with my best performing year ever… so far.

The one thing I attribute my massive rise in profits to patience with my swing trades (up $363,536 so far in 2019)… and adding a simple options strategy (it’s helped me rake in more than $200K so far)…

But the thing is, I’m still sticking to my bread-and-butter setups in small-cap momentums stocks.

Right now, I’m seeing a couple of stocks forming two of my favorite setups… and I’m stalking them for a clear signal — ready to strike once I see a clear area of value.

So what 3 hot momentum stocks are on my radar… and what’s the state of the current small-cap market?

IWM made a massive move after selling off back in September. Right now, the small-cap tracking ETF has its eye on the $158 breakout resistance (the blue horizontal line in the chart below). I think the markets run into Christmas and so far I’ve been right, so there’s no move to cash for me here but instead active swing trading as always. 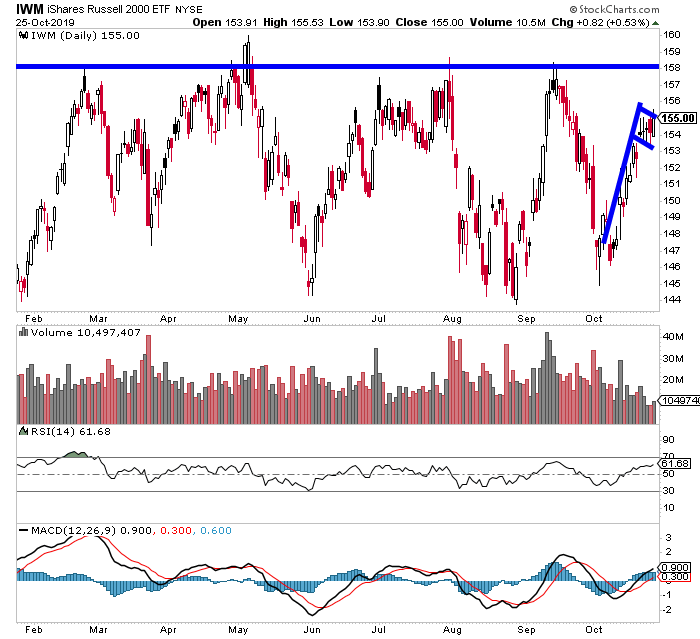 Right now, we’ve got a bull flag formation… and that’s a signal it could break above that key breakout level and rocket higher.

Consequently, this should cause some oversold small-cap stocks to catch a massive bounce… and momentum stocks to rocket higher.

There are two patterns I’m keeping an eye on right now… the fish hook and the rocket.

VERI is one of my favorite stocks to trade.

Well, I have a proven track record of winning when I trade the stock. 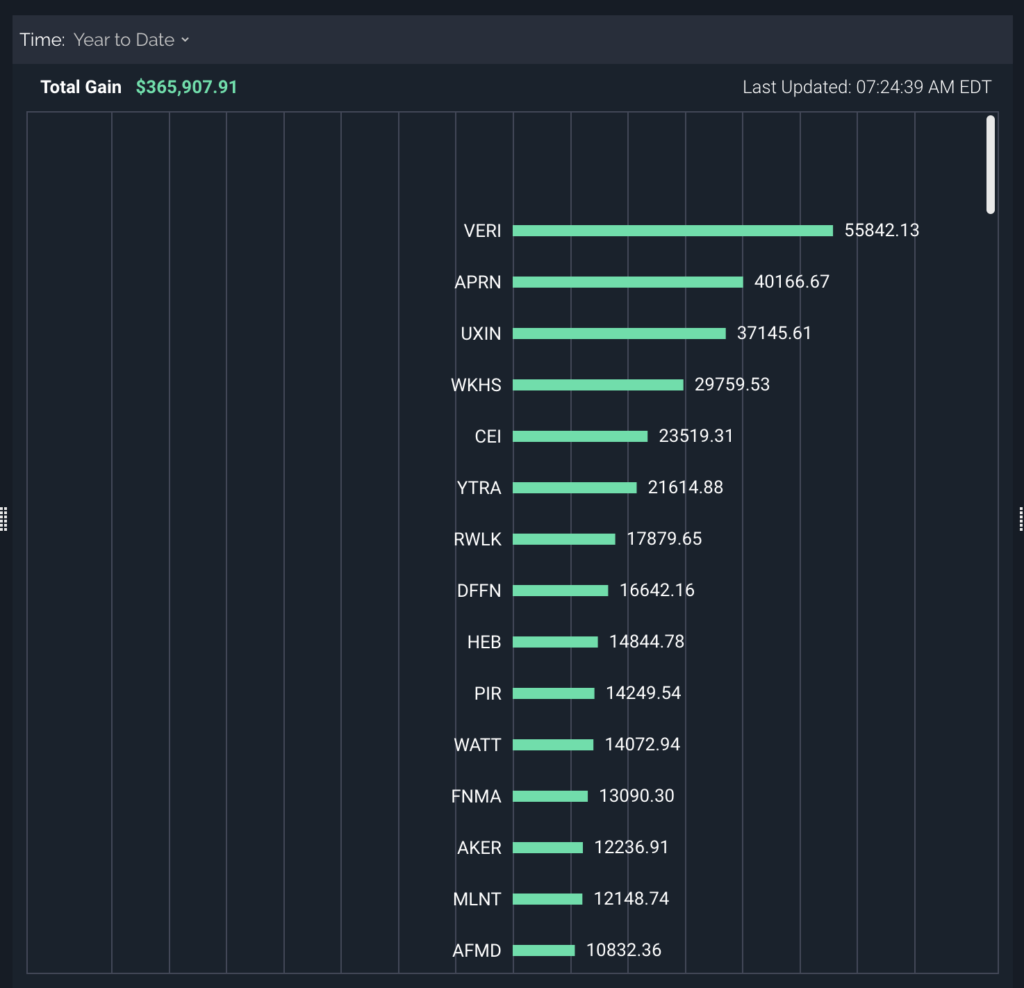 Right now, VERI is my only open swing trade… and it illustrates the potential for an epic fish hook setup if a positive catalyst hits. 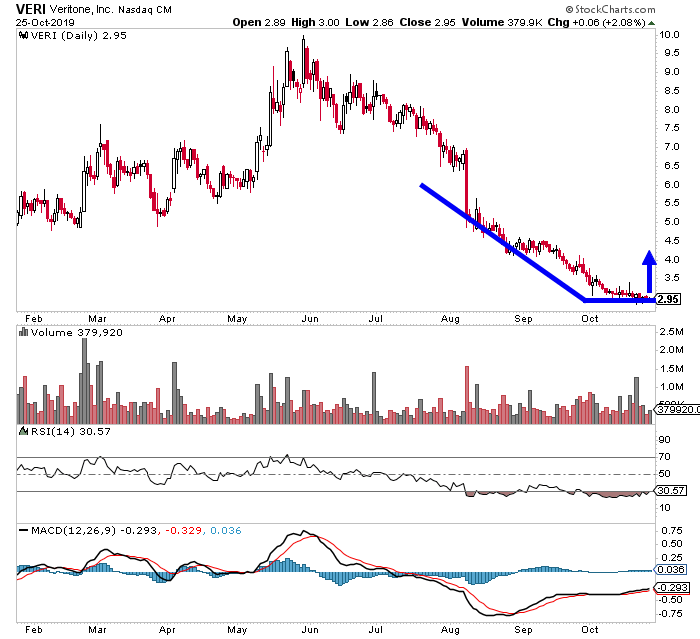 VERI dropped more than 70% from its recent highs… and when a stock plummets too far too fast, usually there are very few short-sellers, and when there’s a bounce — they scramble to cover… and increase the demand for the stock.

Typically, we see stocks with this pattern have massive bounces once the catalyst hits.

Anyway, I remain patient and hopeful the hook will hook big and I reign victorious, once again, on this pattern.

Regardless, earnings are about 2 weeks out so that’s about my timeline on this one.

If it doesn’t run before then I’ll slowly back down my size.

However, all the signs look clear and the stock has found some support right around $3.

OSTK continues to drift in a bear flag but there’s good technical support at $10 and heavy short interest that could fuel a $14 – $16 move if this gets going.

I will monitor for a reversal candle above $10 and take another stab at this soon, though I am more mindful of a support break at $10 this time around given how many times it’s stalled at $12. 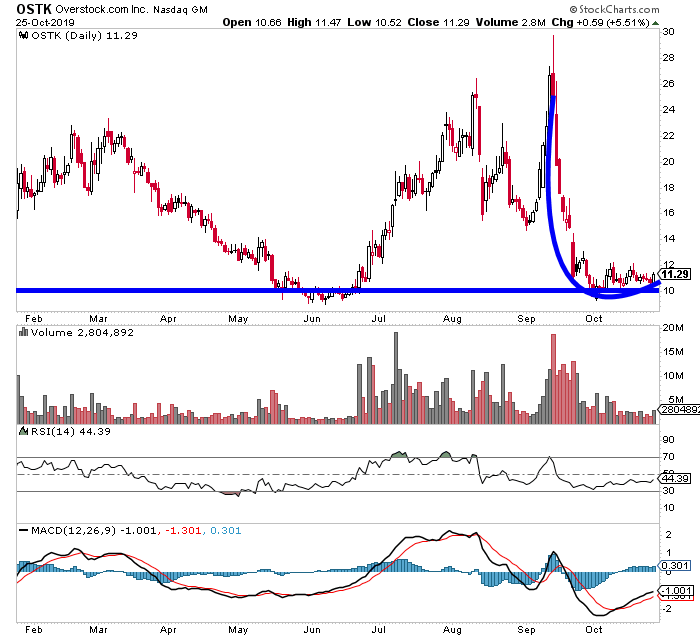 Again, we’ve got the fish hook pattern in OSTK. 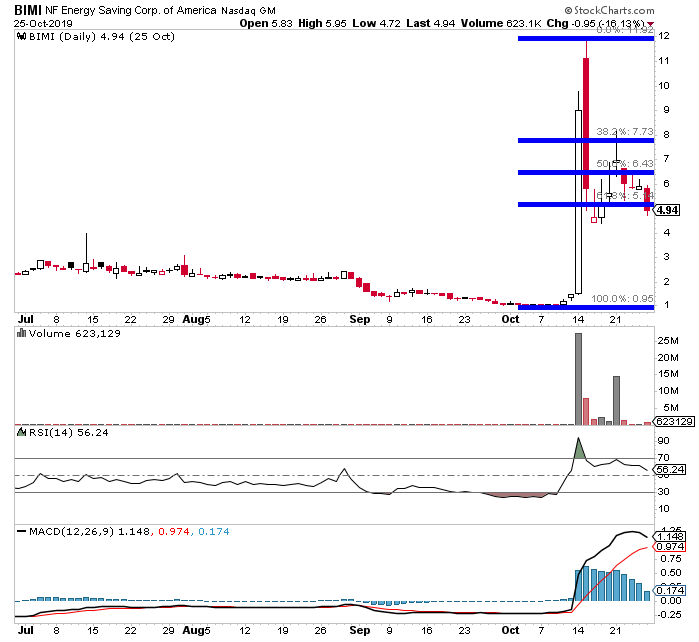 … and it made a massive move, but pulled back to a key Fibonacci retracement level.

Anyway, heavily shorted Fibonacci stocks Wednesday – Friday are my favorite rocket pattern out of the Fibonacci setup or ‘rest and retest’ pattern… that’s exactly what we saw last week in BIMI.

I’ll keep an upper $5’s for entry, there’s range to $8 and that’s the first area to monitor closely followed by $10 if this rocket gets off the ground.

Some times, all you need is just a few battle-tested patterns to find some of the hottest stocks out there in the market.